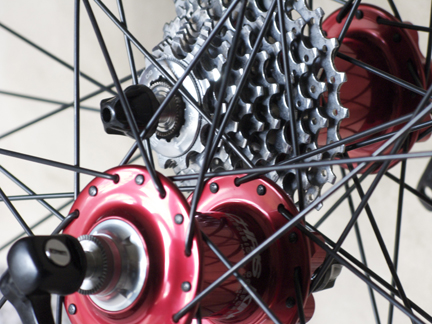 This morning became a fat tire festival as I put the Schwalbe Big Apples on the Gordo rims (that’s a 2.35 tire on a 35mm rim… yow!) It feels almost like snow bike territory.

I’ve been looking forward to trying out these low pressure boys for a while, and it looks like maybe by the weekend I’ll be able to make that happen.

On another set set of wheels (with smaller Mavic rims) went the Ritchey ExcaVaders… a nice 35c tire with, in my experience, a fairly aggressive tread (from a road riding perspective). I don’t expect to run these on the road, I have smoother rolling tires to do that with, but I’m thinking it going to be muddy and wet and that the trails might be fun with these again, so I’m breaking them out. We’ll see. 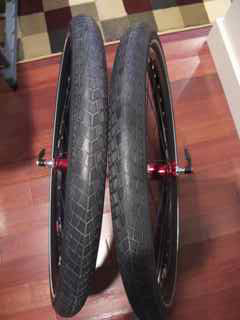 There’s an awful lot of conversation about tires width and design, rim width and design, but I’ve decided to go wide this year. I’m evan changing the width of the road rims I’ll be riding in the spring to a 23mm rim. I’m feeling like the shorter sidewall, flatter contact patch is working for me. As I’ve mentioned before I’ve been using tires as pneumatic suspension on my commuting bike, and I’ve grown fond of it. But it’s a different kind of riding. I’m curious to see what fat and tall Big Apples are like in more aggressive road riding. Will they feel slow? Will they take two blocks to crank up to speed but once there float and flow? Dunno. Yet. I’ll be trying them on a couple of bikes including the premier of the weapon of choice::winter division.

I feel like the weather is going to turn this week… and the road bike will go away for the winter, and the disc brakes and fat tires will rule until spring. Winter is not far away… 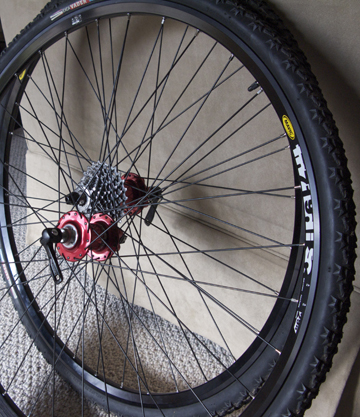