…but it’s far cooler than it was a few weeks ago in the morning. 6:30AM this morning I tossed on a vest and arm warmers and through a leg over my bike. 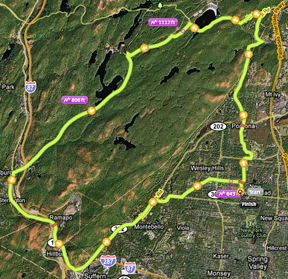 Since the ride I did a few weeks ago I haven’t been able to spin out all the pain in my knees, but both were better this week than last… and again I forgot to take some pre-ride NSAIDs. Sigh.

Anyway, I shouldn’t have sneered at the cold this morning when I decided not to put on some leg warmers as well, there were some times that my knees were red with cold… not a good choice considering. Ah well. But on days like this I love riding early when the roads are quiet, the sun lights up the undergrowth, and the day is cool. Soon enough, it’ll be truly cold when I ride, and I’ll be whining (to myself if only) about being cold. As a final insult, some embrocation I’ve been waiting to try seems to have lost it’s kick, and I didn’t have time to rinse off and use something else. Life, in the small sense, can be… unkempt.

So 28 miles later, I cleanup and hit the road (in the car this time) with the Little One and the Wife. I had pulled out a shirt with happy little football on it, and hoped that I might get a chance to watch a little bit of opening day Jets or Giants. (Both teams won!) We visited a favorite craft fair and said hello to some of the artists and artisans we see year after year (they do become like family after a while… you know the good family that you miss hanging with and don’t see often enough). The Wife picked up a inexpensive bauble or two, and then on our way to check out the “tent sale” of another favorite store, we ran into a street fair where the Little One got a chance to climb into a fire truck for a photo-op. Moments later, the two of them were contemplating a classic street rod. Ah… the joys of youth. And in this fashion the last Sunday I’ll be able to enjoy for a while was spent.