Music Lessons (that work for publishing, too) – The Domino Project:

[Go read the whole thing, because a lot of this applies to everyone.] 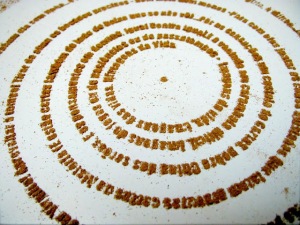 In an attempt to formalize the ritual of waiting, a clock was devised to leave traces of poems while it was turned on. The clarity of the traces is directly proportional to the amount of time one has to wait. The text engraved in the base is a poem by Pessoa, depicting concepts of time, and the futility of understanding them fully. Cinnamon is slowly dropped by the rolling cylinder, leaving traces on the street.

[I’d want up with cinnamon everywhere… but I like the idea of creating some art while I wait. I dislike waiting when it’s because the other party is late…]

Give it five minutes:

And what did I do? I pushed back at him about the talk he gave. While he was making his points on stage, I was taking an inventory of the things I didn’t agree with. And when presented with an opportunity to speak with him, I quickly pushed back at some of his ideas. I must have seemed like such an asshole.

[Been there. Trying to teach “give it five minutes” to my son. Might be one of the better things I can do for him.]