Today Nest ships their first product. It’s a thermostat that is essentially a smart phone tied to your heating/cooling systems, with a some sensors and the ability to learn. It learns when you turn the temps up and down, how often you walk by it when you’re home, how quickly or slowly your home heats and cools and most likely some other things. They sold out of 4 months of production in 72 hours.

Earlier this week, I had to bring my phone in to get it swapped out. And while at this backwater little Apple store ay 9AM I again saw the line outside for people purchasing the iPhone 4S five weeks after its initial release. I’ve seen this by every store I’ve been in or walked past. Two in New York City, one in Westchester County, One in Rockland County and this one in NJ. 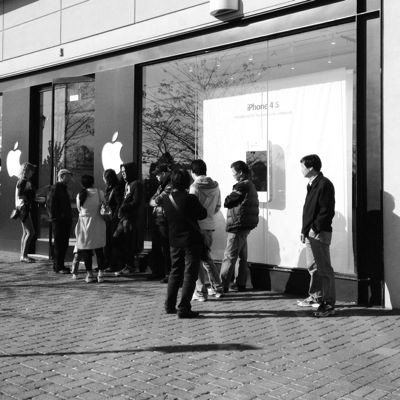 Nest was started by an Apple alum, and was a designer there for 9 years. The guy worked on the iPods, iPhones, and in a sense because they share internals the iPad. And having absorbed the design and manufacturing culture of Apple he essentially would have it no other way at his new company. That isn’t easy—his relatively little company cannot command the scale and resources that Apple routinely does as part of their strategy for success.

I have a bunch of thermostats in my house. When we moved in I changed them to “set back” thermostats—they are “programmable” and so allow you to adjust energy use automatically based on the time of day and day of the week. Sadly, in my house, the heating and air systems are completely separate. And worse there are additional individual heat systems as well. So it goes a little something like this…

There’s three zones for the main hydronic heat. Two upstairs (bedrooms vs. living area/dining room) and another zone downstairs in the spare bedroom. There’s a radiant system in the kitchen, although it turns out to be more for joy than because the kitchen needs the heat. We didn’t know when we redid the kitchen and pulled out the main system heat, so we didn’t risk having a cold, uncomfortable kitchen. There’s also a gas fireplace downstairs that serves two purposes. It adds warmth and joy to the play room where again we pulled out the main system heat. It also runs when there is no power so that room because *the* living space when power goes out for any length of time. Lastly the central air conditioning system is single zone and on its own thermostat.

That’s six thermostats, three systems and two pumps. And while some careful programming makes it all work, the system is not smart, it can’t react to change. What I’d really like is main control that is informed that we’re home and our desired temp is x this time of year. Also, obviously the related settings for when we’re not home, and when we arrive home so that it can start warming or cooling the house in advance. It should also know the outside temp, so it can adjust to changing conditions. It would be nice if nest can manage all this… and maybe it can now, but I have no idea as of yet. And no, I haven’t ordered one, the current model may not help with this overall problem.

But why the big embrace from so many? Because it’s pretty looking? Sure, to some degree. Because it begins to act like we think appliances should in 2011? No doubt. But I think there’s more. I think people are also applauding another company producing technology that also cares about aesthetics and simplicity. Unlike my current thermostats all of which have a beavy of buttons and switches and no intelligence, Nest’s thermostat has one dial and one button, a bunch of sensors, and two forms of connectivity.

Nest is a child of Apple and Steve. Twitter and Square are as well although less directly, and in mostly software. They are about delivering the critical functions for a service in a smart way, and reducing the “options” by making smart decisions. They are “designed”.

People are embracing that more than anything. I just replaced my doorbell switch. I used an inexpensive piece of junk. I’ve looked for doorbell switches and found quite few. Some seem wonderfully modern looking. Others have gee whiz LED lights. But for the cost, none of them did something that made me think this is worth the trouble it’s going to be to install. They didn’t take notice of where the average home owner would have to install the thing.

I want my washer and dryer to be able to send me a notification when they’re cycle’s are done. I want the water softener to tell me when it’s running low on salt. It’s 2011.

I watch houses get “stick” built the same way they were 100 years ago. Sure, a few products are different, but the techniques haven’t generally improved. There are better answers now. There are better systems* (see below). What is more simple than a house that doesn’t need a lot of heating or cooling? The change that we feel when we carry our smart phones is the change we want for all aspects of our lives. And it now up to the next generation of people who have experienced the effects of aesthetics and simplicity in design and the power it has for so many to take a leading role in changing the world with insanely great products. People have raised concerns about Apple’s future. I’m not concerned because there’s momentum there. People have resources and embedded knowledge. Apple will be fine for years. What’s more important to me is to see the same passion and care for design that goes into the Apple products now get going in other companies. And with Nest, it seems they are starting to do so.

* Bensonwood’s OBPlusWall: What sets Bensonwood apart is the attention to energy performance, green materials, and rigorous building science. At the heart of this system is the OBPlusWall (OB for “Open-Built”). These factory-built (panelized) walls are framed using 9.5-inch-deep I-studs filled with R-35 dense-pack cellulose insulation, then clad with exterior moisture-resistant OSB sheathing (with taped joints). Advanced gasket technology is used for air sealing, detailing is provided to minimize thermal bridging, a drainage plane is installed on the exterior, and integral baseboard raceways are provided on the interior for electrical and data cables to eliminate wall penetrations for wiring.

The computer modeling not only controls the exact design and fabrication of these wall panels, but even identifies the proper placement of nylon straps for hoisting the (heavy) modules into place on the jobsite. All this is done with a minimum of waste through material optimization and factory fabrication. OBPlusWall modules ship to the jobsite with windows installed and sometimes also with siding, though for some projects the builder chooses to handle more of the finish work on-site.
The companion to the R-35 wall system is a standard R-38 roof system, also insulated with cellulose. Where performance goals demand, Bensonwood can go a lot further with energy performance—by using deeper I-joists and including additional insulation components in the wall and roof systems.

Recently the company was finishing a house designed to Passive House standards. This walls will have an additional 3.5 inches of cellulose on the interior and two inches of polyisocyanurate on the exterior, to achieve approximately R-60 performance. That project was slowed down because advanced Passive House windows took some time to arrive from Germany—one of the complications with creating state-of-the-art buildings today.

PS I worked on a project with NYSERDA, at the energy company where I once toiled, to see if energy use behavior would change via smart meters that relayed the daily market fluctuations. The smart meters eliminated the “social” pricing we’re used to paying for energy. We pay the same price all day and night though the actual cost of energy fluctuates based on demand like any other commodity market. The idea was to find out whether people would react to this awareness and do the most energy expensive things when energy costs were lower. It was interesting, but ultimately didn’t carry enough information for people to make informed decisions. (You really needed to know how much something was going to cost. If I run the dishwasher now, what does that cost versus running it in the middle of the night?)